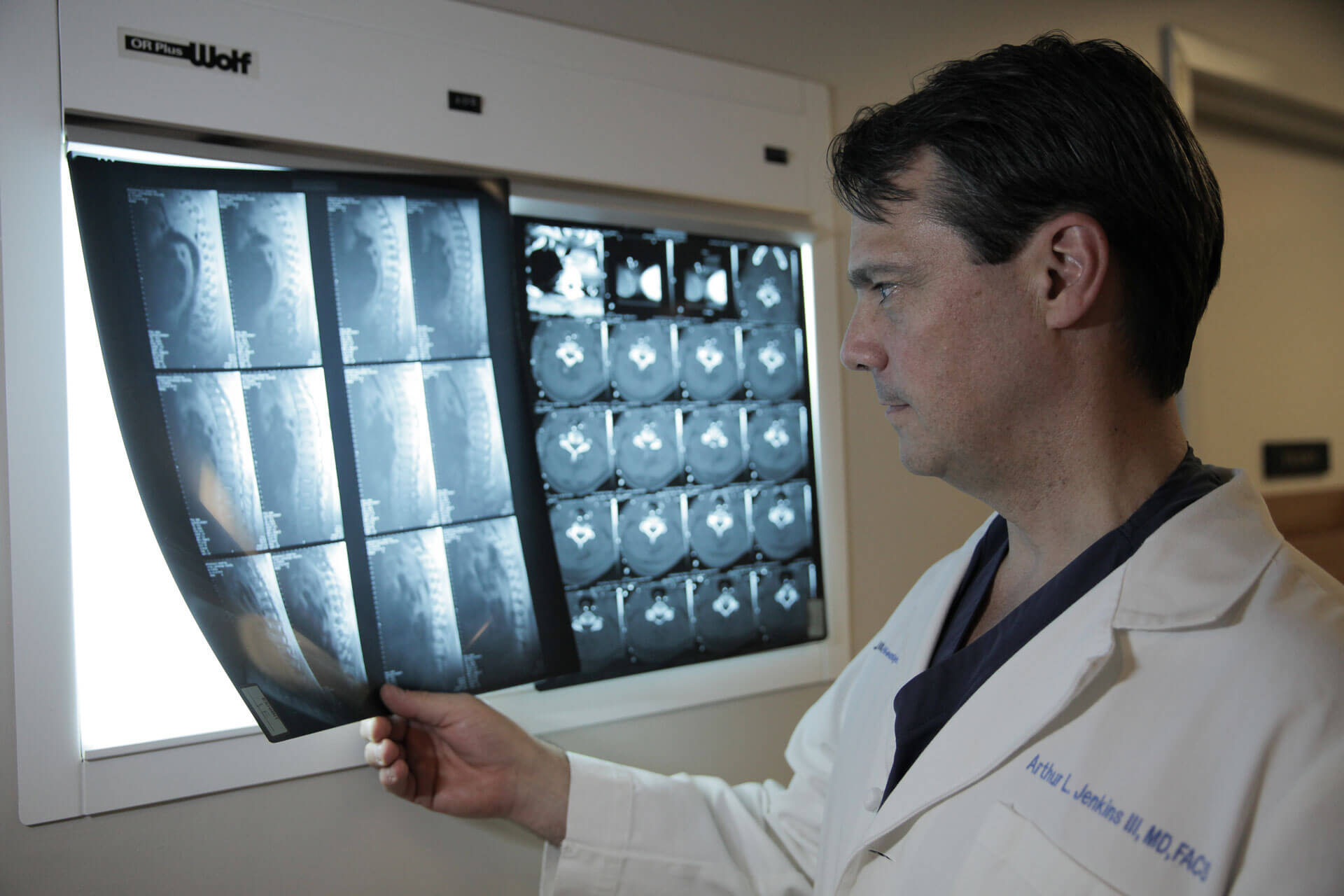 I often see patients who have been labeled with the term “failed back.”  This general term applies to patients who have already had spinal surgery, which their surgeons have labeled as having been technically successful, but the patient did not see adequate clinical benefit and is still considered to be symptomatic in spite of the surgeon’s “excellent” surgical intervention.

There are truly some patients for whom surgery cannot help.  Making the proper diagnosis of a patient’s spinal condition is necessary to identify proper treatment.  Almost every single medical doctor takes one variation or another of the “Hippocratic Oath” upon graduation from medical school.  Central to the Hippocratic Oath is the concept “First, do no harm.” Harm can occur, however, when a surgeon does a procedure without foreseeable or reasonable clinical benefit.  It takes insight, experience, and compassion to choose when and when not to operate in the patient’s best interests.

Therefore, it is of critical importance that patients understand that just like mechanics, lawyers, engineers and athletes, some spine surgeons are better than others at making diagnoses correctly.  Ensuring that the proper diagnosis has been made prior to instituting any surgical treatment is the only way to ensure that your procedure has any hope of making the patient better, which is of course why patients go to see doctors in the first place.

One of the problems that I have seen over the years is that many medical diagnoses are missed by surgeons who focus on treating the 3 or 4 most common diagnoses they see and are unable to expand the scope of what they look for.  I call this the correlate to the famous “seeing is believing” maxim; sometimes “believing is seeing.”  The 4 diagnoses that I find even average spinal surgeons may miss (this is not published data, but the result of my 15+ years in clinical practice having treated thousands of patients) are:

These diagnoses are missed partly because they are not quite as commonly present in the population, or their location is away from where the more common pathology is located so the eye isn’t trained to look there.  One generation instructs the next, these may have a somewhat unusual presentation, and because they do not stick out like a sore thumb when one looks at a typical midline cut on an MRI.  They require an understanding of the overall spinal alignment and a willingness to look outside the common to the less commonly identified surgical areas.

I have found that many patients with “failed back syndrome” (or even labels of “fibromyalgia”) have one of these other underlying diagnoses and a well intentioned surgeon who did not notice the underlying anatomic problem may very well have done a different procedure or spinal fusion on them based on incidental disk degeneration elsewhere, and then not understand why the patient did not get better.  This was a failure of diagnoses and a surgical treatment plan based upon misunderstanding, which sounds like a recipe for disaster.

Some surgeons sadly do seem to take the old maxim too much to heart “if all you have is a hammer everything looks like a nail.”  I have also heard some surgeons say “Of course I’m going to recommend surgery.  They’re coming to me FOR SURGERY.  Why else would they go to a surgeon?”

It is also important to know that surgeons make the majority of their salary based on the number of and complexity of the procedures they perform.  The bigger the procedure, the more they make.  The more surgeries they perform, the more they make.  This incentivizes them to work as hard as they can to help as many patients as possible, but there is also the potential to skew the decision process for marginal indications, or when a decision needs to be made as to the scope of the procedure to be performed.  There could be point where the surgeon has general equipose (both options seem similar in terms of outcome), but one is bigger (meaning more risk to the patient, but more reimbursement to the surgeon).

A second reason for failed back includes something that happens to every surgeon, but not every surgeon wants to admit this; the fact that certain spinal procedures having a known rate at which the procedure does not work as intended first go round. The most common example of this is in spinal fusion procedures.  Even in the simpest procedures, single level fusions in healthy patients, we know that between 2% and 5% the procedure does not result in the bones successfully healing as they were intended to.  This is known as pseudoarthrosis or fusion failure, and even in the best of hands can occur, myself included.  It is also important to understand that some surgeons are better at performing certain procedures than they are at performing others, especially if those procedures are rarely performed.

Strangely, not all spine surgeons inform their patients that this pseudoarthrosis is not just a possibility, but in some cases especially likely (for example, when the patient has impaired biological conditions such as osteoporosis, they are a smoker, and other medical and even social situations). It is easy enough to admit the process is not perfect,  and then informing the patient of these risks and signs and symptoms to look for.  It seems that some surgeons feel that if they do not suggest that everything happens “perfectly” and they are a “perfect” surgeon that the patients would not go with them.

I find that patients (with 1 or 2 notable exceptions) are reasonable and appreciate the honesty and forthrightness that such a discussion engenders, and as long as they know what to expect and when to expect it, they understand that surgery on the spine is not a single event but a process of investigation, intervention and recovery and in some cases that recovery can occur in a longer time period than ideally hoped for.  In cases where pseudoarthrosis develops, a second surgery is often required, but the results after the second surgery (if undertaken at the time the symptoms become manifest), are usually as good as they would have been as the patient healed first time, and the second procedure has a very high (98-99%) chance of success.

Keeping patients informed of these issues is actually the best way to have the patient on your side and the patient to know that the surgeon is on their side.  Many patients in my clinical practice who have been labeled as failed back patients actually had a pseudoarthrosis.  The fact that the pseudoarthrosis occurred did not necessarily mean that the surgeon failed in any way, shape or form to perform the procedure adequately.  Where they may have failed, however, is in the diagnosis of the pseudarthrosis, and have in some rare cases actually tried to convince the patient that the problem was in their head (rather than in their back).

In this particular case, every other of five subsequent spinal surgeons who saw her in consultation agree that the bones had not fused and she had a pseudoarthrosis.  In addition, in subsequent court proceedings, the radiologist who initially read the films as “fusion” admitted that they have no idea what a fusion actually looks like, and they assumed because the surgeon wrote on his prescription form “evaluate fusion” that the fusion had occurred already and that they were simply intended to document how well it was proceeding.

While this raised significant issues and questions in this particular case, it shows me that one must always keep a careful and critical eye not only on the patients and their imaging, but upon ourselves as surgeons to never be smug, never assume that everything goes according to plan and that even a 2% nonunion rate should be anticipated, plan for taking into account and treated aggressively to make sure that 100% of our patients have a good eventual outcome from what we do.

Other cases of failed back may be due to problems with the final position the patient has fused into, sometimes known as “flat back syndrome.”  The spine from skull to pelvis consists of an elegant collection of serpentine curves in one plane that is intended to be curved in one section, and straight in another.  When the normal curvature of the spine is undermined by either the position of the patient on the table or the technique and technology used by the surgeon where a normal curve would allow for better balance a straightened spine result in abnormal stress on other sections and segments of the spine, resulting in poor balance, in some cases bad posture and stress, back pain, and acceleration of the spinal degeneration.

Managing the spinal deformities that life throws at patients is hard enough; undoing deformities induced by another surgeon’s techniques is even harder, but not impossible.  I have several patients who have had one procedure or another, and then when finished healing, they were in too straight a position.  Initially, many of them do well but then subsequently developed problems, and we have treated those hyperstraightened deformities with surgery to re-establish a more normal curve.  Other patients come to me having fused in such a position due to some other conditions (ankylosing spondylitis, prior trauma or infection, degenerative conditions).  We are usually able to significantly improve their lives by fixing the deformity.

Once again, this requires a very critical eye (whether it is your own work or somebody else’s), rather than assuming what this other person or even I may have done turned out exactly as hoped.  Keeping the patient and their best possible outcome as the center of our focus allows us to look past ego, any sense of comradery to not undermine another surgeon’s work, or even apathy; and reminding ourselves that the patient came to us for reason: to give them the best possible chance to transition from being a patient back into being a person.

The management of the failed back, therefore, is complicated, requires an open mind and a very deep medical and surgical toolbox to dig into and in some cases treatment at a hospital where the most advanced techniques and technologies can be employed to ensure best possible outcome from a potentially large and complicated operation.