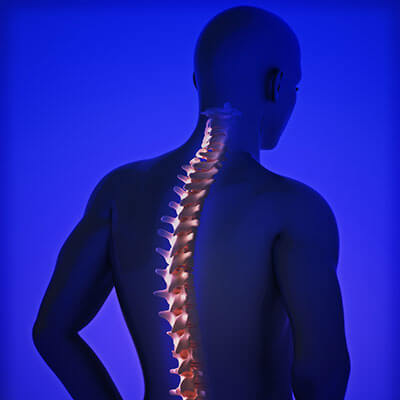 Jenkins NeuroSpine is nationally known for helping patients find pain relief in their spine, nerves, and through pain management treatment. Always keeping up with industry leading technology, we turn patients back into people.

At Jenkins NeuroSpine, we provide care and treatment for a variety of conditions.

How do I know if I have Other Spinal Conditions?

At Jenkins NueroSpine, our nationally known surgeon, Dr. Jenkins, is an expert in diagnosing the source of your spinal condition and developing a treatment plan that will alleviate the chronic pain you’re experiencing.

Below are additional spinal conditions we treat:

Chiari malformations (typically the Chiari I, there are 4 types but the type I represents more than 95% of all cases) can manifest as a complicated series of seemingly unrelated symptoms: weakness, numbness, pain, sometimes facial and eye symptoms, headaches, among others. Some patients are even misdiagnosed with fibromyalgia due to the diffuse nature of the symptoms [reference to my letter to JAMA regarding an article on fibromyalgia].

The condition is caused by the compression of part of the brain, the cerebellar tonsils, which are the remnant of the part of the hindbrain that used to control our tails, but no longer have any meaningful function. In patients with a Chiari malformation, the tonsils may be enlarged, or the skull may have developed not quite big enough to contain them and the rest of the brain, and they may be forced down into the opening at the bottom of the skull (foramen magnum) with the top of the spinal cord, causing compression of the spinal cord and diffuse symptoms.

This syndrome can be brought on in a patient previously without symptoms by an accident or injury, where the spinal cord is traumatized within the narrow confines of the anomaly, resulting often in much worse symptoms than would be expected by either the degree of the trauma, or the findings elsewhere in the spinal axis (since this is at the edge of the cervical MRI field of view, and many times the symptoms manifest themselves in the area of the thoracic spine, this diagnosis may be overlooked).

Treatment consists of a decompression of the foramen magnum and often the C1 lamina, called a suboccipital craniectomy with cervical laminectomy. 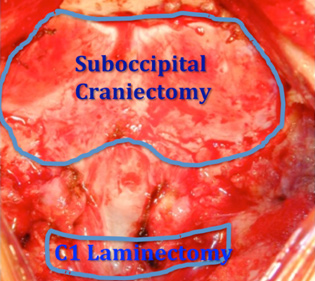 The treatment often includes expanding the space further by putting an expanding patch on the dura, called a duraplasty, and may also include shrinking the size of the tonsils so they do not exert pressure on the brain stem and spinal cord.

Spinal tethering is a general description of a combination of entities that all result in reduced freedom of movement of the spinal cord within the spinal canal due to some form of abnormal adhesion, scar, or membrane that causes local deformity or tension on the surface of the spinal cord. When the neurons that run in that portion of the spinal cord are deformed, stretched, or otherwise manipulated, they do not function normally. This may result in pain, numbness, weakness, or even changes to appear within the spinal cord known as a syrinx or syringomyelia (fluid within the spinal cord). When this condition manifests itself clinically (ie, the patient has symptoms related to the tethering), then release of the adhesions can result in improvement in neurological function, although this is very delicate and risky surgery in some cases.

Congenital – When the spinal cord is developing before we are born, there are a number of steps that may fail to develop normally. The spinal cord usually grows less than the spinal vertebral column over time, and the level at which the spinal cord ends and a tail of nerve roots (the cauda equina) begin to rise from the lumbosacral area to stop somewhere between L2 at T12 in the vast majority of people. When the anchor line of the spinal cord, a fibrous band known as the filum terminale (the end string), is too thick or fails to stretch, the spinal cord fails to rise adequately and remains under greater tension downwards. This can put tension on the brain stem as well as local nerves, and patients can have a wide spectrum of symptoms. In milder cases, these findings may present later, while more severe cases present in childhood or infancy. 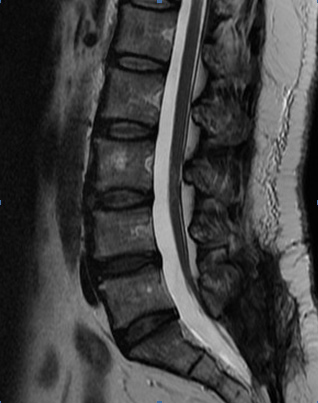 Other types of congenital tethering include more serious congenital deformities like a diastematomyelia, or split cord anomaly, where a fibrous or bony structure passes through a hole in the middle of the spinal cord, and this band can act like the filum terminale to cause tension, neurological dysfunction, and pain. These need to be identified, and can cause scoliosis, weakness, or mimic other neurological syndromes. 5-10% of the time there is more than one, and the entire spine should be imaged if this diagnosis is suspected. The arrows point to the band, which was found to be partially calcified at surgery.

Post-traumatic – When the spinal cord is damaged as a result of trauma, there is often bruising or bleeding from the cord itself, either as a result of tearing of surface vessels by stretch, or by physical damage from bone fragments. This bleeding then can lead to scar formation between the spinal cord and the inner surface of the canal, known as the dura. When this scarring occurs, the deformity can cause further loss of neurological function or pain, often in a delayed fashion, sometimes 10-20 years later. When this occurs, the tethering can be cut so that the cord no longer is being tugged on with every movement of the body, and this can relieve or improve the symptoms. In this case, the patient had tethering anteriorly from the original fracture (blue arrow) and posteriorly as well (orange arrow). 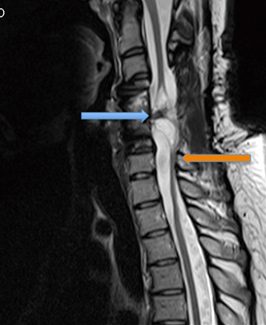 DO I HAVE A SPINAL CONDITION?

Surgery or other invasive treatments or events (myelograms, spinal anesthesia, “wet taps” with epidural procedures, infections, among others) can also introduce blood or other forms of scarring into the spinal canal and lead to adhesions and often delayed dysfunction. This can lead to a condition known as arachnoiditis, or clumping of nerves from scarring together, either to the dura on the inside of the canal or just together into a lump that causes local deformity and dysfunction. This tethering may be more difficult to treat surgically, as there is very little to prevent the nerves from re-scarring together once separated. The normal anatomy on the right shows the nerve roots lining up with even spacing in the canal, while the abnormal clumping, due to being shot in the hip and having bullet fragments spray the spinal canal, inducing bleeding and extensive scarring that caused the roots to clump in the middle. 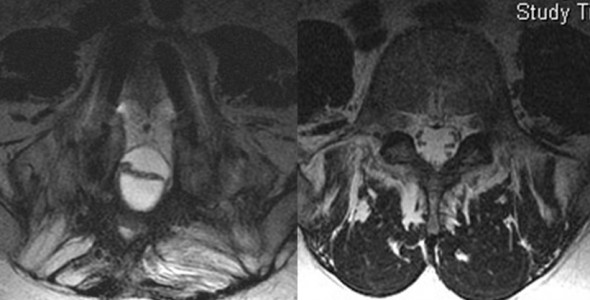 These are usually a congenital anomaly, where an extra layer of an inner membrane within the spinal canal (the arachnoidal layer, so named because it has the appearance of being as fine as spider’s web) forms which becomes like a balloon that fills gradually over time and exerts both mass effect on the spinal cord as well as being a source of tethering of the spinal cord to the dura. These can be taken out relatively safely, but they can (about 10% of the time) come back.

In this case, the patient had leg weakness, and MRI had only a suggestion of something deforming the spinal cord and nerve roots (blue arrows) and slightly altered spinal fluid appearance behind the cord (which represented the fact that the spinal fluid in the cyst was not freely circulating like the rest of the spinal fluid (red arrows) A normal spinal cord image is shown to demonstrate the normal position of the cord and roots. A special test, the CT myelogram, showed that the dye did not initially communicate into the cyst (orange arrow). He improved from profound weakness and numbness in his legs to being able to walk again without assistance by 4 months after surgery.

Infections of the spine may result in weakness, pain, instability, and if untreated or not treated in time, even death. These are often an emergency, such as diskitis or meningitis, or at least require treatment urgently (such as with osteomyelitis, or bone infection). Understanding the condition, including the urgency to intervene to prevent further neurological or biomechanical damage, is critical to protecting the patient and improving their chances of getting back to a normal life.